The Montgomery is the perfect place to have your wedding celebration, social occasion or special event.

The History of Montgomery Event Venue 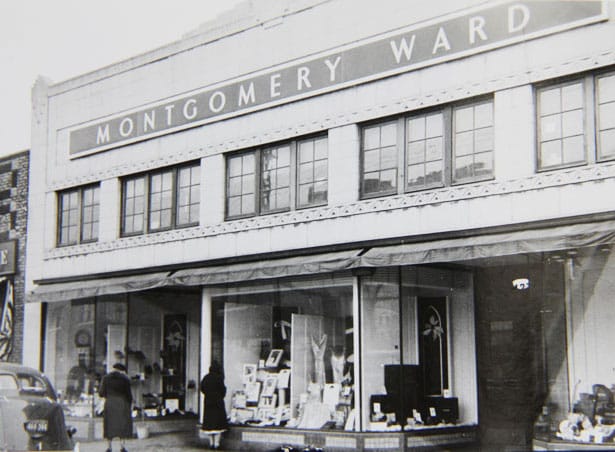 The land upon which the present Montgomery building stands was developed around 1909 as part of the commercial enterprises in “The New Morse Block.” Businesses included The West Side Drug Store, Salt-Sulpher Water Company, Kansas City Fine Art Company, The Daily Call, Noah – French Dry Cleaner, and The Standish Grocery. Over the years, various operations would come and go. One of the longest businesses in this location would be The Daily Call, which operated here until August 1925. In 1926, The Daily Standard absorbed this and other papers.

Regardless of the stock market crash in 1929, several chain stores were looking at Excelsior Springs for expansion purposes. Part of the Morse block had already given way to the J.C. Penney store and, in October of 1929, The Newberry Variety Store opened in a building where the White Sulpher Water spring house had stood. The decision to locate the Montgomery Ward Company here was also being made, as George Everitt, company CEO began an expansion for 1,500 new rural stores to be completed.

According to a newspaper clipping, “Excelsior Springs was chosen because of its ideal location in the heart of rich agricultural district only after a thorough analysis of the town had been made to determine the future of the city. The company is firm in the belief that Excelsior Springs shall continue to grow and prosper in coming years.”

In early 1930, Mose Woods was moving the stock from his business, the Excelsior Hardware Company, to its new home two door south on Thompson, while razing had already begun on the old store to make way for the new Montgomery Ward building. By June, under the direction of E. L. Morse, the Montgomery Ward building was nearing completion. “Brick work on the stucture, a one-story double balcony interior type, is expected to be completed within the next two weeks,” stated The Daily Standard. “Preparations are now being made for the beginning of the plastering operations.”

The front facade presents an Art Deco styling and, being constructed specifically for use by the Montegomery Ward Company, displays the “MW” initials in the center of the roof edge. It opened on October 4, 1930 with 32 departments. J. A. Carey was the first local store manager.

By now the competition with J. C. Penney and Sears was heating up, as a worsened economy was being felt from the stock market crash a year earlier. In 1931, Ward showed losses of $8.7 million on $198 millions in sales. To save Ward, J.P. Morgan & Company representative Harry P. Davison recruited Sewell Avery to take over and by 1933 the company was back in the black. Then in 1936, the federal Robinson-Patman Act prevented big stores like Ward from getting better deals than small stores. Ward tried to get around this by selling house brands. In 1939, an in-house copywriter introduced a booklet about a little red-nosed reindeer named Rudolph, which became a Christmas classic and was included with millions of catalogs, bumping Montgomery Ward popularity. But throughout, there was significant mismanagement by Avery which contributed to Ward’s decline in the 1940s and 1950s. Around 1945, Montgomery Ward was closed in Excelsior Springs and J. C. Penney moved their own store into the building.

More recently the building was utilized by Wicker’s Furniture Company before being purchased in 2011 by Brent and Lisa McElwee for The Montgomery Event Center. The building retains a high degree of integrity from the era and is the only Art Deco commercial building in Excelsior Springs. The Hall of Waters, a magnificent Art Deco structure, is more correctly categorized as a public building. A historic survey by Deon Wolfenbarger in May, 1993, showed the Ward’s building to be individually eligible for listing on the National Register. It is located within the local Hall of Waters Historic District and is a contributing building within a National Register Hall of Waters Commercial District. 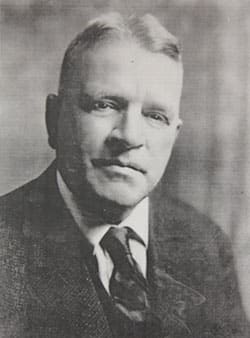 E. L. “Liv” Morse played a leadership role in the development or Excelsior Springs. A tribute in 1930 from close friend James A. Reed, a former Missouri Democratic Senator, stated that Morse came here, a poor boy without any advantages to give him a start in life and was responsible through his numerous activities for the upbuilding of Excelsior Springs. He recalled his fights for a water works, a railroad, highways, the Elms Hotel, the mineral waters and the U.S. Veteran’s hospital. “I think,” said Mr. Reed, “I can say he built Excelsior Springs.”

In the late 1890’s, Morse purchased the Music Hall. After it burned in 1908, he began development of eight blocks on Thompson Avenue (The New Morse Block).

Morse was one of the most dominant figures in Missouri politics in the 1920s. Morse oversaw the building of the Montgomery Ward building on Thompson Avenue, which opened just four days prior to his death on October 8, 1930. 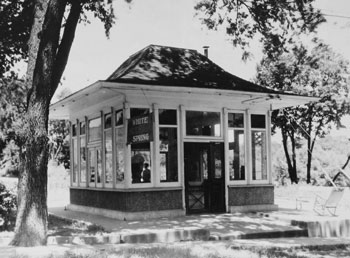 White Sulpher Spring was owned by Morse and sold from this location behind the present day Church of Christ, and also sold from the Salt-Sulpher Water Company in the commercial block on Thompson. When the Hall of Waters was built, this water was piped to the building and used to fill the swimming pool.

The pavilion is no longer standing although there is local interest in rebuilding it.